Marcy called me at work one afternoon last fall and announced that Gate1 Travel was having a flash sale for independent travel to Italy – just $499 for an 8 day “Heart of Tuscany” tour including airfare from New York, car, hotel, and breakfast.   It sounded way too good to be true, but we called and found that was indeed the price –  I don’t know how they could price the package at that low rate, but there is was.   I was in the right mood, so I agreed to have Marcy to sign us up.   We did buy trip insurance and upgraded the size of the car, so the final total wound up being around $1,500 for both of us. Still, you can hardly take a long weekend local trip for that.    The real caveat was that the window for travel was January to April – Winter in Italy to be sure, and the 8 days included what amounted to four driving/flying days, but hey, it was Italy!

For airlines, we had the choice of Alitalia or Emirates.   Alitalia would have given us Delta miles, but it was an additional cost and we figured we would try Emirates.  We were glad we did.  I think one reason our trip was so cheap was that Emirates needed to fill their huge Airbus A380s running between JFK and Milano Malpensa.  Our Emirates experience deserves its own entry, so look for that story elsewhere in the blog.

The package itinerary had us landing at noon in Milan, picking up the rental car, then driving 3½ hours south to Montecatini Terme, which is centered between Florence, Siena, Luca and Pisa.
Gate1 provide a suggested itinerary, but we were really on our own to choose what we wanted to do each day.   We had choices of trips to the cities mentioned above, plus driving tours through the Tuscan countryside.

The 7th day of the trip had us traveling back to a hotel near the Milan airport so we could be staged and ready to fly back the next day.
​
Our trip was full of adventure and the many individual stories are found separately here in the blog, but I wanted to cover the overall scope of our trip here in case anyone is interested in this same kind of package.

Flying on the Emirates big double-deck Airbus A380 was an adventure!
[Show slideshow] 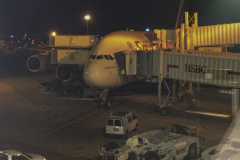 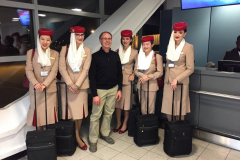 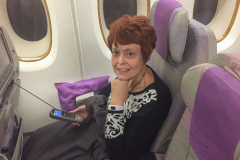 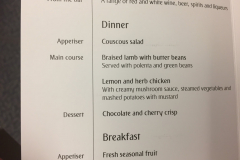 We drove from the Milan Airport through central Italy (which looks very much like my Southeastern Michigan home). Next, we headed right at Parma across the blustery, rainy mountains to La Spezia on the coast.  Finally, we turned down the coast for 40 miles then back left to Montecatini Terme, which is about 30 miles from Florence.
The drive was rough.  Thirty hours after leaving home though, we figured that the charm of rain reflecting off the marble pavement upon arriving in Montecatini was worth it!

So what do you get with winter Italy?   For us,  it was a mix of pouring rain and absolutely beautiful sun, with temperatures ranging from the low 50s to the low 60s. The day of our planned trip to Pisa was rainy and dreary and we hung around the hotel room and rested until afternoon.  Finally though, we braved the rain and hopped the train through Lucca to the Pisa San Rossore Station.  Looking back,  the Pisa excursion was a  great adventure!

…and here was a gloriously beautiful early spring day near Rocca Maggiore, atop Assisi

We upgraded our car to this Pugeot.  It was a 6-speed manual transmission diesel with absolutely great mileage with a nice built in NAV system (once we got it from speaking French to British English). However,  it was very difficult to navigate it through the very narrow streets!

At the end of our journey, we headed another three hours north to depart the next day from Milan.

We were greeted on this very early spring morning with a view of the Alps and the sun rising over Northern Italy.

Welcome to "This Photo Journey"

Our recent photo journey is just one aspect of the greater life journey that Marcy and I share where our guiding theme is taken from the Old Testament scripture in Lamentations 3 verses 21-23:

“This I recall to my mind, therefore have I hope. It is of the LORD's mercies that we are not consumed, because his compassions fail not. They are new every morning: great is thy faithfulness.”

For the past several years, Marcy and I have been photographing and blogging about our travels. We began offering our images online and at art shows and a little business blossomed. We now have galleries in two cities, along with online sites and an Etsy store.

If you click the menu link for our homepage, you will find our image gallery with some of the works from our portfolio. If something you see sparks an interest, please contact us for size, format and pricing.
However, more than just being an online image gallery, we hope that our descriptions, images and videos become a source of enjoyment or inspiration for your own travel adventures.